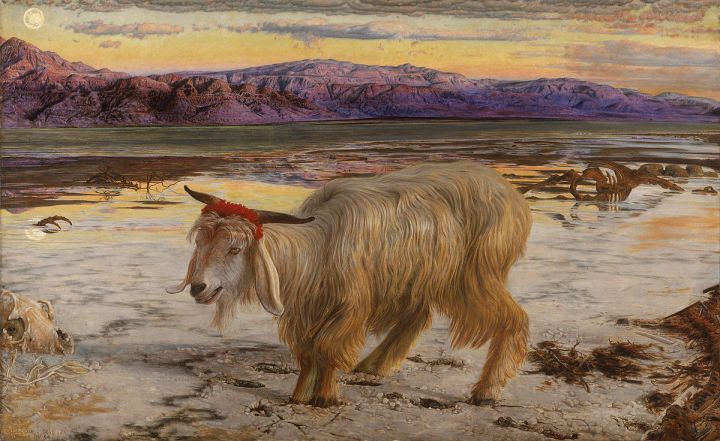 Jesus’s arrest, trials, suffering and crucifixion were the definitive miscarriage of justice imposed on the only innocent man that walked this earth. He was the definitive scapegoat, the truly blameless one who bore others’ guilt, the object of irrational hatred.

Pontius Pilate knew it and said, “I find no guilt in this man.”  “After examining him before you, behold, I did not find this man guilty of any of your charges against him. Neither did Herod, for he sent him back to us. Look, nothing deserving death has been done by him.” (Luke 23:15-16) Yet Pilate let the savage crowd choose to release Barabbas, a violent rebel and murderer, instead of the Jewish rabbi who epitomised virtue and moral spotlessness. Jesus’s death meant the possibility of life for Barabbas, a detestable sinner who deserved death.

Even the criminal on the cross next to Jesus is a character witness, insisting “this man has done nothing wrong”, and the Roman centurion who watched Jesus die declared “Certainly this man was innocent!” (Luke 23:47) What led both men to put their trust in Jesus, even though it was obvious He was dying or already dead? What power could Jesus exert as a corpse? Both these witnesses of the crucifixion recognised that Jesus was not a mere man but the Son of God and that his death was not the last word.

On Easter Saturday we look back at the Passover in 33BC when Jesus’ dead body lay in a tomb belonging to a rich man called Joseph, sealed by a stone weighing between 1-2 tons, and guarded by at least four Roman soldiers. To his followers, Jesus’s death must have seemed like a tragic failure, but God the Father used the threads of monstrous injustice against His Son to weave a magnificent tapestry of victory over death and sin.

When I was growing up, I was always confused by statements thrown around by Christians like, “Jesus died for us. He died for our sins.  Jesus saves us from our sin.” That explained nothing to me.  A million questions remained, “What did he have to die for? What’s the point of an innocent man dying? How can he save me from my sin when he didn’t do my sins?” The prepositions “for” and “from” made no sense in my mind.

That is until I read about the Jewish ritual of the scapegoat laid out in Leviticus 16 and the mystery started to take shape that Jesus is the “scapegoat” of heaven. He is the one who diedinstead of me. He died as my substitute. The innocent takes the punishment of the guilty. From the time of the Exodus, Jews celebrated the Day of Atonement, when the High priest took two goats, chosen by lot, and presented them at the door of the tabernacle. One was to be offered to God (YHWH) as a blood sacrifice and the other was chosen to be the scapegoat to be sent away into the wilderness. The blood of the slain goat was taken by the High Priest into the Holy of Holies behind the sacred veil of the tabernacle (later the temple) and sprinkled on the Mercy seat, the lid of the ark of the covenant which housed the two stone tablets of the Ten commandments. Later the High Priest would confess the sins of the Israelites to God, placing the sins figuratively on the head of the scapegoat, who would symbolically take them away into the desert, never to be seen again. This is a shadow of what Jesus would do when he died on the cross.

History illustrates that it’s human nature to create scapegoats out of an individual or people group, to shift blame for all that goes wrong in a society regardless of who is truly guilty. In the first century, Emperor Nero targeted the early Christians by accusing them of starting the fire in Rome. His scapegoating led to the torture and execution of thousands in the new faith who were killed for sport, eaten by animals, even lit up and burned alive as torches. In the 1930’s, Stalin scapegoated the Kulak peasant class for all the woes of Russia, (even though they were the most productive farmers) causing the deaths of 7 million Russians from the ensuing famine. Likewise, Hitler scapegoated Jews for all the problems Germany was facing and murdered at least six million innocent men, women and children. In Rwanda, the Hutu majority government scapegoated the Tutsi minority, resulting in a mass slaughter of almost a million Rwandans during a 100-day period from April to July 1994. The 21st century is no different. The blame game is still the preferred modus operandi of those who wish to deflect blame and dodge accountability for their own guilty actions. After all, it is much easier to scapegoat an individual or group  rather than own up to one’s own wrongdoing and fix the problem in constructive ways. Scapegoating may be effective for those who hold power, but it is unfair and cruel, and can lead to death or great harm to the scapegoat.

Jesus was the ultimate scapegoat and the only truly innocent one. He died so that Barabbas could go free. As Jesus took his last breath on the cross, he said, “It is finished!” What was finished? His mission to redeem sinners was complete. It was the exchange of our sin for his righteousness; of our guilt for his innocence; of our life for his death. He paid for our sin with his unjust death. There is no human being beyond his redemption, not even someone like Barabbas. Just like the scapegoat of the Old Testament, “for our sake he (God) made him to be sin who knew no sin, so that in him we might become the righteousness of God.“ (2 Corinthians 5:21) The most wonderful thing about Jesus’s mission is that is is borne out of love…pure unadulterated love! The kind of love that we are unable to fathom. This is how Paul describes the sheer love that motivated Jesus’s sacrifice:

“For while we were still weak, at the right time Christ died for the ungodly. 7 For one will scarcely die for a righteous person—though perhaps for a good person one would dare even to die— 8 but God shows his love for us in that while we were still sinners, Christ died for us. 9 Since, therefore, we have now been justified by his blood, much more shall we be saved by him from the wrath of God.” (Romans 5:5-9)

Jesus is the only one who can absorb the wrath of God, who can make us right with God and remove the burden of sin from us forever, because He is the only sinless one and because He is God. He is the only effective scapegoat who can cleanse us and give us a new heart and a new start. We may try to appease our consciences, forgive and excuse ourselves, but our sin is against a holy God who detests any form of sin and wrongdoing. We cannot forgive our own sin or compensate with good deeds.  But all our blame and guilt can be placed onto Jesus, like that Old Testament scapegoat who was sent out to die in the wilderness, weighed down symbolically by the sins of the people. Just as God provided a ram in the thicket for Abraham to sacrifice instead of his precious son Isaac, God the Father watched his own son Jesus walk up a hill called Calvary and die willingly as our substitute.

The only condition for this exchange is that we face up to our guilt and own it. We accept Jesus as our scapegoat. The amazing exchange was taken up by all the disciples except Judas. It was taken up by the three Mary’s and millions of other followers of Christ through the centuries. It was taken up by the thief on the cross in his dying moments, the centurion at the foot of the cross and Joseph of Arimathea. But it was not taken up by those who were blind to their own guilt– the religious leaders, Herod, Pilate and many others who saw Jesus face to face and hated him in spite of his goodness.  Neutrality is not an option if you understand who Jesus saw himself to be. He is either your scapegoat or your judge. Jesus leaves us no third option.